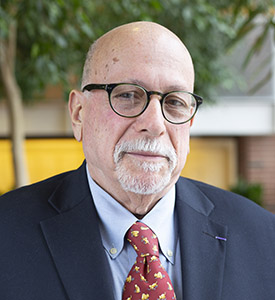 CAS Professor Matthew W. Finkin also holds a Swanlund Endowed Chair. Professor Finkin conducts research on issues in labor and employment law, domestic and comparative; and works on legal issues in higher education. He is the author or editor of eleven books, including For the Common Good: Principles of American Academic Freedom (with Robert Post; Yale University Press, 2009), Privacy in Employment Law (Bureau of National Affairs, updated in electronic form since 2020), The Case for Tenure (Cornell University Press, 1996), as well as a substantial body of periodical writing. Since 1997, he has been general editor of Comparative Labor Law & Policy Journal (with Sanford Jacoby, Anderson Graduate School of Management, UCLA). He also serves on several editorial boards, including the Canadian Labour and Employment Law Journal, the European Labour Law Journal, and the Zeitschrift für ausländisches und internationals Arbeits- und Sozialrecht. Since 1999, he has been a member of the governing board, Institute for Labor Law and Employment Relations in the European Union (Trier, Germany). He is a recipient of the Alexander von Humboldt Foundation Research Prize for "internationally acknowledged achievements in the field of labor law" (1995) and of doctorates honoris causa from the Universities of Trier (2012), Padua (2019), and Athens (2011). In 2021, he was awarded the Bob Hepple Award for Lifetime Achievements in Labour Law by the Labour Law Research Network, a consortium of ninety university-based labor law centers worldwide; and in 2020 he was given the Susan C. Eaton Outstanding Scholar-Practitioner Award by the Labor and Employment Relations Association. In 2015, Professor Finkin was named a Chevalier (knight) of the Ordre des Palmes Académiques (Order of the Academic Palms) by the French government. The Order of Academic Palms was founded in 1808 by Napoleon for accomplishment and dedication in teaching, scholarship and research. This award is given both to French citizens (including those living abroad) and non-French nationals.