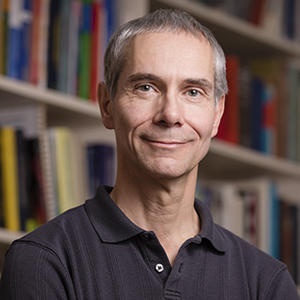 Martin Gruebele has been a strong force in many areas of chemistry, physics and biology, ranging from laser-assisted nuclear fusion to vertebrate swimming behavior, often in collaboration with other groups on campus. Within that range of research, he demonstrated downhill folding of proteins to support a key prediction of energy landscape theory; examined fast biomolecule dynamics in living cells and organisms; imaged excited-state dynamics of nanomaterials and cooperative dynamics on glass surfaces; developed simple statistical thermodynamic transport models; learned how energy flows in organic molecules, and modeled molecular quantum computing. Awards include the Nakanishi Prize, the Hans Neurath Award, the Friedrich Wilhelm Bessel Prize and the Sackler International Prize. Gruebele is a Member of the German National Academy of Sciences, a Fellow of the American Academy of Arts and Sciences, and a Member of the National Academy of Sciences. He is a Fellow of the American Chemical, Physical and Biophysical Societies. Among his pastimes he enjoys endurance sports, and was Masters Champion in the Race Across America and the Grandmasters Ultrarunning State Champion. He is married to Nancy Makri with two children Alexander and Valerie, both of whom are engineers.