Andrei Kureichik, an internationally celebrated theatre artist and filmmaker from Belarus, had to flee the country following the brutal crackdown against the pro-democracy opposition in August 2020. His play, Insulted. Belarus(sia), a documentary-style play written in exile about the fraudulent Belarusian elections and violent suppression of dissent, was presented over 120 times worldwide (from Ukraine, Hong Kong, Nigeria, across the EU, the UK, and North America) in 21 languages from September 2020 to August 2021. Many professional and academic performance groups around the world found the work resonant with their own concerns about diminishing democracy, police brutality and State violence, and disinformation campaigns. In this talk, Kureichik will discuss the ways he has leveraged his writing in exile to help mobilize citizens fighting for democratic freedoms and to bring international awareness to human rights violations.

As Freedom House reported, 2020 marked a 15-year democratic decline which has only accelerated around the globe. Political rights and civil liberties in all regime types have been deteriorating, and “ethnic, religious, and other minority groups have borne the brunt of government abuses in both democracies and authoritarian states” (https://freedomhouse.org/report/freedom-world/2020/leaderless-struggle-democracy). Kureichik offers ways to use art as a means of combatting these abuses, building solidarity, and raising awareness of global democratic decline.

Hosted by: Department of Theatre and Russian, East European and Eurasian Center 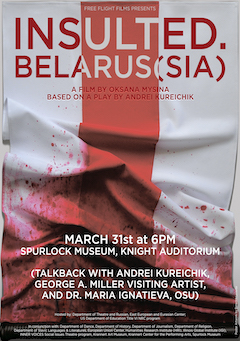 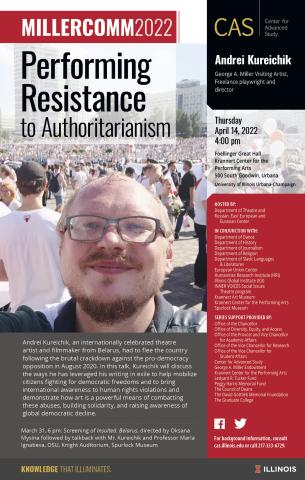