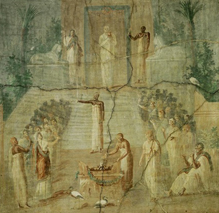 Death and Ritual in Flavian Epic

During his Center appointment,  Professor Augoustakis will continue work on a monograph providing the first systematic analysis of scenes of death, lament, and ritual practices in three epic poems: Punica, by Silius Italicus; Thebaid, by Publius Papinius Statius; and Argonautica, by Valerius Flaccus. The poems were produced during the so-called Flavian period of Latin literature (69-96 CE), when epic poetry experienced a renaissance under the three Roman emperors, Vespasian and his sons, Titus and Domitian.

Punica narrates the events of the Second Punic War, the long conflict between Romans and Carthaginians in the late third century BCE. Thebaid recounts the mythological civil war of Thebes, when the sons of Oedipus turn against one another because of the refusal of Eteocles to yield the throne of Thebes to his twin brother, Polynices. Argonautica memorializes the trip of Jason to the land of the Colchians to claim back the Golden Fleece.

Why death and ritual? Death and dying occupy a prominent role in Latin literature: from gladiators dying a dis/honorable death in the arena to soldiers fighting for their country to members of the elite committing suicide as a means of resistance against the increasing autocracy of the emperor. Professor Augoustakis will interpret scenes of death and burial in these poems, (a) elucidating their significance in developing the poems’ plot lines and (b) interpreting their sociocultural background and the development of Roman cultural practices. Close analysis of such ritual, and the literary descriptions of ritual in particular, will add a critical dimension to our understanding of Roman culture in general. Professor Augoustakis plans to complete the monograph by the summer of 2016.