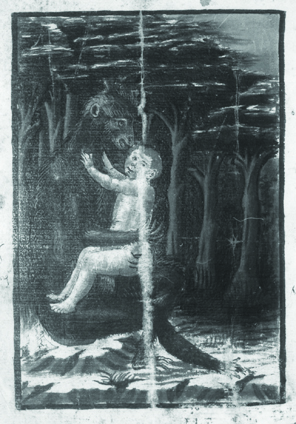 Mad cow disease, avian flu, swine flu – in the last decade we have linked the most frightening global epidemics with animal contagion, even though these animals are not necessarily the vectors of infection. The idea that an “animal” can transmit its disease to a “human,” that the boundary between species is unstable, seems to create a crisis of identity that is at the heart of recent theoretical studies on animality. Professor Stoppino is exploring this area from the observation points of the European Middle Ages and Early Modernity.

In her book-length project, she reads the category of the medieval and early modern animal through the lens of contagion and education. By coupling texts that express uneasiness over the medical distinction between species with texts that represent the teaching of animals, she examines the anxiety that results from comparing humans with animals.

In Old French and Catalan texts discussed in chapter two, for example, animals teach lessons to human beings through their vices and virtues, which are represented as elements that unite humans and animals. In Aquilante e Formosa, the fourteenth-century chivalric text described in chapter three, the protagonist is raised by a monkey, and the educational value of representing humans through animals coexists with anxiety over cross-species contamination.

During her Center, appointment Professor Stoppino aims to complete these two chapters and begin writing about the Early Modern figures Girolamo Fracastoro (1478-1553), the Venetian physician who discovered rabies, and Agnolo Firenzuola (1493-c.1545), a Florentine poet. She plans to complete the project in 2011-12.