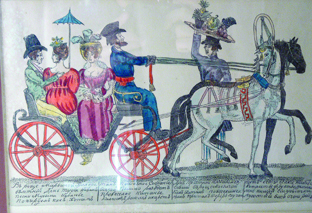 The Muscovite post-horse system (known as the iam) consisted of a network of villages settled along important travel routes. Village residents were obliged to transport royal goods and personnel from station to station, providing fresh mounts, wagons, and drivers. Beginning in the sixteenth century, this postal relay network expanded to become one of the earliest identifiable institutions of an imperial Russian state.

By the early 1700s, the relay network was a gigantic social and political institution, radiating out from Moscow across Eurasia along nine great roads. Tens of thousands of bonded men and women were settled in the relay stations, and the infrastructure gradually opened to include private travel and correspondence. By the early 1800s, the network was entrenched at the intersection of imperial politics, commerce, and literature—with the road, its drivers, and their songs among the first great commonplaces of Russia.

During his Center appointment, Professor Randolph plans to complete his book project on this topic. By reconstructing the life and political and cultural activity of this “society on the road,” he aims to reveal the institutions of movement that sustained the empire’s emergence and the values and forms of social interaction they created. The scholarship represents a unique window onto the making of the empire’s mental world and fills a gap in our understanding of the intellectual and cultural history of Imperial Russia.