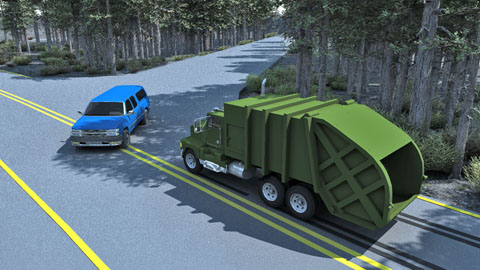 Jurors in court cases increasingly are presented with computer-animated reconstructions of past events, especially when the forensic evidence involves complex dynamics of motion (e.g., skid marks from a car accident). Forensic details are entered as parameters into computer models, which then apply basic laws of physics to project a result; the end product is a visually rich and realistic cinematic recreation of the past event.

How such animations affect the phenomenon of hindsight bias is a matter of some concern. Hindsight bias is a widely studied bias in human information processing that involves an inability to recapture earlier frames of mind. After the facts about a focal outcome (e.g. an election victory, a stock market crash, etc.) become known, people tend to feel as though they “knew it all along,” failing to appreciate their earlier state of predictive uncertainty. For the most part, hindsight bias is a normal byproduct of the mechanisms of human memory. Hindsight bias is clearly counterproductive in court cases involving liability, negligence, or malpractice, where the goal is to gauge what a defendant could reasonably have foreseen at the time of his or her action—without the benefit of hindsight.

In his earlier research, Professor Roese and his students found that hindsight bias was at least doubled when computer animation was used to portray the key events in legal cases, relative to presentation of the same material with text and static diagrams. During his Center appointment, he will conduct additional experiments to answer many new questions of both theoretical and practical importance, such as whether repeated viewings of animation or use of slow motion exacerbate hindsight bias even further. An overarching goal of this project is to specify broadly useful courtroom guidelines for how best to present forensic animations without undue effects from hindsight bias.