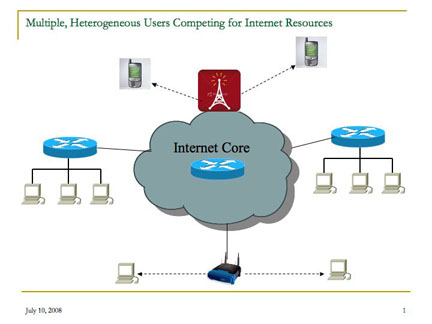 WHY AND HOW SHOULD THE INTERNET BE FAIR?

A central question in Internet design is how its finite capacity can be shared most fairly among users. Early work in this area assumed that the number of Internet users is fixed; in reality, the number of users varies over time. For example, a user might download a document or video and then not access the Internet until she needs to transfer another file. What might a user in such a dynamic situation desire? Among other things, she would certainly like to minimize the length of time required for file transfers.

At least two considerations arise in this context. First, it is well known that file sizes on the Internet are not exponentially distributed but instead exhibit heavy tails (i.e., most of the files are small, but a few large files comprise most of the Internet traffic). And second, the current limiting factor in traffic flow is relatively scarce capacity at the access points compared to the core.

During his Center appointment, Professor Srikant will lead an investigation that takes these considerations into account. His team will apply statistical models to file arrivals and departures to analyze the performance of various resource-allocation schemes. They will also explore how fair-resource allocation affects file transfer when wireless components are involved, a very different environment with variations in both channel capacity and interactions between users.

Professor Srikant expects the project will narrow the possible choices of fair-resource allocations that should be considered when designing algorithms to provide high-quality service to Internet users. The work will also contribute to several areas of applied mathematics, such as Markov decision processes, stochastic control theory, queueing theory, Brownian motion models, convex optimization, and combinatorial algorithms.