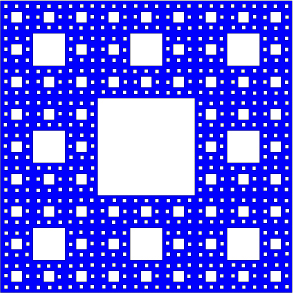 Since ancient times, people have been fascinated by periodicity, namely when the same pattern is repeated over and over. Examples of this can be found in architecture, music, poetry, and many other human endeavors. A related idea is that of self-similarity, where an object as a whole presents an appearance similar to a part of itself. Nature is abundant with objects and phenomena that exhibit features of self-similarity; among the most familiar are the fern plant and lightning.

One of the earliest known references to self-similarity in mathematics is by Gottfried Leibniz (1646-1716). Interesting examples of self-similar objects began appearing in mathematics in the late-nineteenth and early-twentieth century, along with tools for studying them. Ever since then, such objects have been popping up all over in mathematics – as space-filling curves, stochastic paths, universal continua, parameter spaces, and more. In 1975, Benoît Mandelbrot coined the term fractal to describe a self-similar object.

During his Center appointment, Professor Merenkov will study certain geometric deformations of various fractals, in particular those known as Sierpinski carpets. Continuous deformations of these fractals have been well understood since the 1950s. More recently developed branches of mathematics, such as the study of negatively curved groups, have brought new challenges, particularly the need to understand the properties of Sierpinski carpets under a class of deformations called quasisymmetric maps. Professor Merenkov expects that his investigations in this area will shed additional light on the geometric properties of fractals and some of the main conjectures in the field: the Kapovich–Kleiner and Cannon’s conjectures.