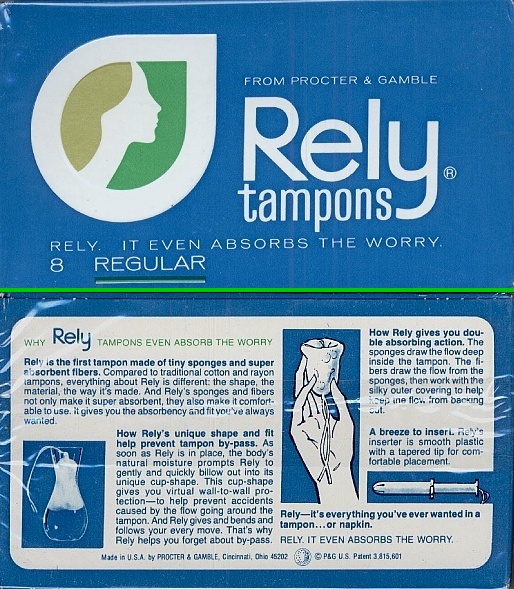 Rely Tampons and Toxic Shock Syndrome: Emergent Technology and the Co-production of Disease

By 1980, upwards of 70 percent of women used tampons. In order to improve tampons and promote greater use, some corporations introduced absorbent synthetic materials into their composition. Yet, the technological shift in tampon design from cotton to synthetic proved disastrous. The new technological solution to absorb menstrual fluid co-produced a human-made health crisis, resulting in Toxic Shock Syndrome.

Professor Vostral is launching a book project that considers the broad research question: How do assumptions about progressive science, technological solutions, and, in this case, women’s bodies, contribute to the co-production of emergent technology and previously unknown diseases? Her lens will be the Rely tampon, which was designed and manufactured by Proctor & Gamble in the late 1970s and early 1980s.

The innovative Rely tampon replaced traditional cotton with a synthetic material consisting of polyester foam cubes and chips of carboxymethylcellulose. Though the course of this disease path is still contested, some microbiologists argued that within the vaginal environment the carboxymethylcellulose chips broke down into glucose – a rich nutrient source for the bacterial strain staphylococcus aureus, which, if already present in a woman who happened to have a compromised immunity system, reproduced rapidly. Severe cases resulted in symptoms of shock and eventual death.

During her Center appointment, Professor Vostral will review documents from the 1982 product liability suit, Kehm v. Proctor & Gamble, concerning the wrongful death of Patricia Kehm, who used Rely tampons and died of Toxic Shock Syndrome. These primary sources provide insight into product testing at Proctor & Gamble, procedures followed at the Centers for Disease Control, and the ways in which lawyers at the trial presented scientific findings to raise doubts on both sides. She will also conduct oral histories with many of the trial’s expert witnesses and examine advertisements for Rely, to gain a perspective on the cultural elements of technological use.