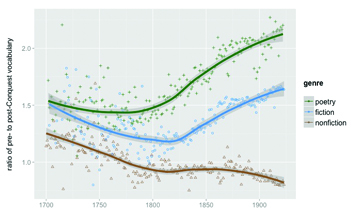 The Social Differentiation of Literary Genres 1800-1950

Our accounts of literary history suffer from two oversights. One problem is that we simply haven’t read much of the material published in the last two hundred years. Another is that our narratives tend to look for “turns” and “movements” that can be dramatized with a small number of examples. Long gradual changes can be misrepresented or missed entirely.

Since an overview is exactly what we’ve been missing, large digital libraries give literary historians an opportunity to reconsider the basic outlines of our subject. The special character of literary language, for instance, was a much-debated question in 20th-century literary theory. We can now approach that as a concrete historical problem: Professor Underwood has shown that literary language becomes steadily, and dramatically, less like the language of nonfiction over the course of the 19th century.

But scholars won’t long be content with a purely linguistic description of literary change. To understand the broad trends that are now visible, we also need a way of connecting social concepts to our new wealth of textual evidence. During his Center appointment, Professor Underwood will work on a book that models a solution to that methodological problem. Professor Underwood will focus on genre as a case study. Some pieces of the problem will be familiar to scholars. We’ve known since Richard Altick, for instance, that reading audiences started to specialize in the later 19th century. And we know that by the early 20th century this had produced a generic stratification of literature, distinguishing, for example, the serious novel from “genre fiction.” By connecting these pieces to other trends (for instance, to the emergence of literary language itself), it will be possible to get a longer perspective on the problem and a better social explanation. In doing this, Professor Underwood also wants to demonstrate the value of new methodological resources. A change has taken place in the culture of statistical modeling (as Leo Breiman argued fifteen years ago), and this change has made modeling a more useful interpretive lever than humanists yet recognize.

Differentiation of genres in a collection of 872,000 English-language volumes between 1700 and 1923. Each point represents the ratio between occurrences of words that entered English before 1150, and those that entered 1150-1699, in all the text published in a genre in a given year.