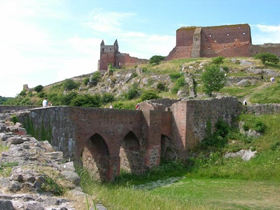 The Haunted Empire: The Russian Literary Gothic and the Imperial Uncanny, 1793-1844

Russian Gothic literature (1793-1844) consistently depicts the empire’s peripheries as haunted landscapes. These areas become settings for what Professor Sobol calls the imperial uncanny – the experience of danger and uncertainty in ambiguous colonial spaces within Russia’s borders. The Gothic genre aesthetically enacts these tensions and offers a powerful critique of empire through the popular form of an entertaining, suspenseful narrative.

Professor Sobol’s book-length project focuses on two geographical spaces in Russian Gothic literature: the Baltic/Scandinavian “North” and the Ukrainian “South.” Both areas were relatively late additions to the Russian empire and thus preserved an aura of exoticism during the period under study. The North/South paradigm offers an alternative to the prevailing stereotype of “Russia between East and West.”

The book pays particular attention to the specifics of the location and the imperial context of Gothic events in these narratives. Where in imperial geography does the Gothic encounter take place? What is the power relationship between the participants of the encounter? Are they ethnically marked? And why is it that particular ethnicities are portrayed as sources of Gothic horror?

Ultimately, Professor Sobol aims to reconstruct a uniquely Russian tradition of the imperial uncanny – a fictional space into which the Russian empire projected its colonial fantasies and anxieties and where, through the use of Gothic tropes, it created the apparitions and monsters that continue to haunt Russia’s historical imagination. As the current Russian-Ukrainian crisis has demonstrated, the Russian imperial uncanny is still at work today. Professor Sobol’s study points to a long history of Russia’s imperial anxiety and ambition derived from its inability to fully accept the otherness of its formerly colonized neighbors.