From Science to Time to Vanity Fair: Global Warming Becomes a Hot Topic

The cover of the May 2006 issue of Vanity Fair featured movie stars Julia Roberts and George Clooney alongside political luminaries Al Gore and Robert Kennedy, Jr. A stylist had dressed the four in complementary shades of green and set designers posed them Hollywood-style in front of a mossy, ivied backdrop. Some consider this special environment-focused "Green Issue" a crucial tipping point in journalism's coverage of global warming and the environmental movement generally. This talk will explore that notion, look at the history of related environmental news coverage in the United States, and consider the power of celebrity in the environmental movement and its effect on news coverage and public salience. 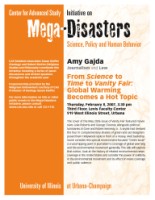