Was the Bronze Age Volcanic Eruption of Thira (Santorini) a Megacatastrophe? A Geological/Archeological Detective Story

Akrotiri was an island town located along the southern coast of Thira (Santorini), Greece. It was but one of many Minoan towns scattered across the Aegean that were part of a powerful kingdom centered on Crete. Life on the island and possibly across the Aegean was shattered in the 17th Century BCE by a large volcanic eruption. The eruption preserved evidence of the sophisticated lifestyle of the people of Akrotiri in the same way that the 79 CE eruption of Vesuvius preserved Pompeii. Clues about daily life are evident in the frescoes found in some of the larger houses that portray well-groomed people, large galleys, agriculture, domestic animals, and abundant sea life. There are no written records describing the destruction of Akrotiri during the Bronze Age eruption, but many oral histories within cultures around the eastern Mediterranean carried the memory of this catastrophic event for centuries. Was this eruption a turning point in Minoan history or but one event in the natural political/cultural evolution of a culture?
WILL-AM580 FOCUS interview with Grant Heiken 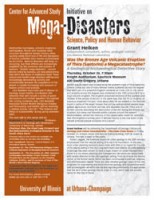