The Aesthetics of Cyberspace

Cyberspace is a place made entirely of mind, so it is likely that, as with everything else the mind touches, it will develop its own aesthetics. Are they already there?

John Perry Barlow, described by the Utne Reader as one of the "100 visionaries who could change your life," is co-founder of the Electronic Freedom Foundation, Fellow at Harvard's Berkman Center for Internet and Society, author of the "Declaration of Independence of Cyberspace," and The Economy of Ideas, contributing writer for Wired, self-proclaimed cognitive dissident, and former lyricist for the Grateful Dead. Deeply interested in the arts and the possibilities for artistic communications offered by cyberspace, he also examines the difficult relations between the politics of cyberspace and the politics of national governments.

John Perry Barlow's talk is part of the CAS and Beckman Institute interdisciplinary initiative Cyberarts: A New Aesthetic? coordinated by Janet Smarr, Program in Comparative Literature and the Unit for Criticism and Interpretive Theory. Running for ten consecutive Wednesdays, this series addresses how computer technologies are affecting the way we think about the arts. 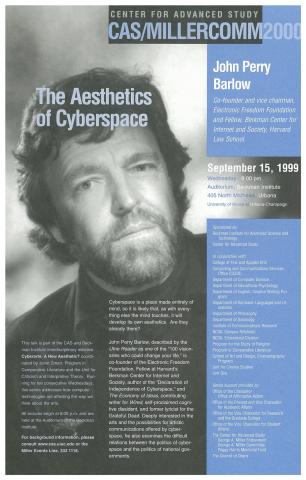