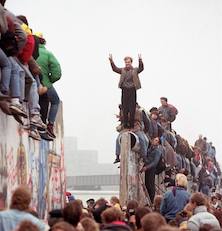 Remembering 1989: Future Archives of Public Protest examines the massive unrest in the streets of East Germany which led to the fall of the Berlin Wall. Shrouded by the false narrative of the inevitability of German reunification, these protests have yet to find a place in Germany’s memorial public sphere. Professor Pinkert turns to a range of cultural productions – literature, film, installation art, photography, memorials – in order to assemble an entirely new dynamic archive of 1989 that accounts for the open-ended promises of the uprising.

We have become all too accustomed to the idea that the past is controlled by the present, ignoring the un-archived knowledge that lingers underground and across temporal zones (outside authorized histories, sites, and commemorations). Shifting memory studies from the now-familiar critique of the powerful to an archive for the future shapes the foundational argument of the book. This allows a new understanding of popular movements which have been forgotten or considered failures. Although the nascent impulses of these movements may not come into view within the official historical record, Professor Pinkert aims to retrieve their open-ended signals in vibrant, though often hidden, memory ecologies today. She will focus on post-1989 German culture, but the argument will have ramifications for scholars working on other transitional periods and other parts of the world. Remembering 1989 will alter our understanding of revolutionary protest and its potent, yet often intangible, afterlife, and will allow us to consider the world we care for now and what we pass on to the next generation.