Historians in Action: How and Why We Reclaim an Armenian Feminist Past

Professor Bilal will first provide an overall introduction to Feminism in Armenian: An Interpretive Anthology and Digital Archive, a collaborative project with Lerna Ekmekçioğlu (MIT) that aims to end the ever-present invisibility of activist women in Armenian historiography and collective memory. She will then focus on one of the authors featured in this project, namely Yelbis Gesaratsian (1830 - ?) editor of the first Armenian women’s journal in the Ottoman Empire. Drawing on Gesaratsian's writings, Professor Bilal will discuss the interrelatedness of discourses on gender, sexuality, body, emotion, culture, history, nation, modernity, land, and music in the nineteenth-century Armenian intellectual narratives.

Melissa Bilal is Visiting Assistant Professor in the College of Humanities and Social Sciences at the American University of Armenia. She has a PhD in Ethnomusicology (University of Chicago) and BA and MA in Sociology (Boğaziçi University, Istanbul). Previously, she has taught several Music, Memory Studies, Gender Studies, Armenian Studies, and Ottoman Studies courses at the University of Chicago, Columbia University, and Boğaziçi University. She was recently Visiting Scholar of History at the Massachusetts Institute of Technology where she worked on Feminism in Armenian: An Interpretive Anthology and Digital Archive, a book and digital humanities project (with Lerna Ekmekçioğlu) on twelve Ottoman-born Armenian feminist activist writers. Together with Professor Ekmekçioğlu, she is also the convener of the annual Feminist Armenian Studies workshops and the founding member of Feminist Armenian Research Collective. Her most recent publications include the article “Lullabies and the Memory of Pain: Armenian Women’s Remembrance of the Past in Turkey” (Dialectical Anthropology, August 2018) and the CD project Voice Signatures: Recordings of Russian Armenian POWs in German Camps, 1916-1918 (Staatliche Museen zu Berlin – Preußischer Kulturbesitz, Forthcoming 2019). 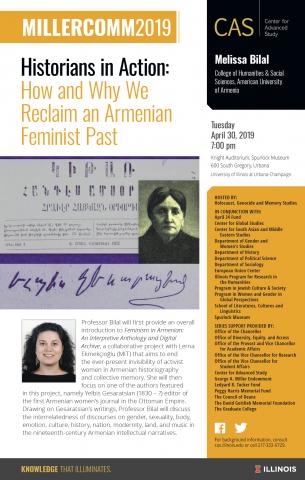