Chiriboga’s guitar will be joined by singer Patricia Ortega and dancer Malu amidst the instrumental colors of an expanded ensemble of Illinois Jazz Studies students performing arrangements of traditional Flamenco pieces, popular Spanish folk songs and Chiriboga’s own Flamenco compositions.

David Chiriboga is a full-time professional Flamenco guitarist based in Chicago. Chiriboga’s style was nurtured in Andalusia in studies with prominent guitarists Paco Serrano, Jose Antonio Rodriguez, Emilio Maya, and Antonio Heredia. He received his degree in Music Performance at Northeastern Illinois University under the instruction of Professor Brian Torosian.

Chiriboga has been performing professionally since the year 2000. He previously performed with The Guitars of Spain, Bandoleros and Spanish Flow, and currently plays with the Ensemble Español Spanish Dance Company, Guitarra Azul and Flamenco Cuadro El Payo. With these ensembles, he has toured extensively in the USA and also internationally in Spain and Mexico. He has also been involved with the Old Town School of Folk Music both as an instructor and as an accompanist for Flamenco dance classes.

In addition to a busy performance schedule, Chiriboga’s music has appeared on TV commercials for Chase Bank, Glade Internet, Subway, and Potbelly’s, and in the TV shows Empire (Fox) and Chicago Med (NBC). 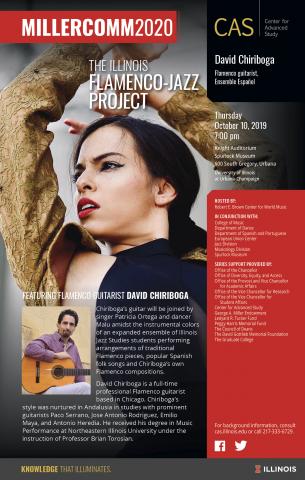