Tiananmen: The People Versus The Party

This screening is free and open to the public

A new PBS documentary directed by Ian MacMillan and written by MacMillan and Audrey Maurion. Produced by Christophe Nick and Ed Stobart.

On the night of June 4, 1989, Chinese troops entered Tiananmen Square in Beijing, violently crushing the largest pro-democracy demonstrations in the history of the Communist regime….

Unfolding with the drama of a political thriller, the film investigates how a peaceful student protest calling for liberty ended seven weeks later in carnage, documenting the many turning points when the violence could have been avoided but tragically was not. With never-before-seen Chinese television archival footage and exclusive interviews with key insiders — from protest leaders and students to politburo members — TIANANMEN: THE PEOPLE VERSUS THE PARTY reveals the scale of the 1989 protest, its aims, the military crackdown and the aftermath. [PBS press release]

This film is being screened in anticipation of a public lecture on September 19 by Wang Dan, one of the main student organizers of the Tiananmen Square Protests. More information about the public lecture can be found here. 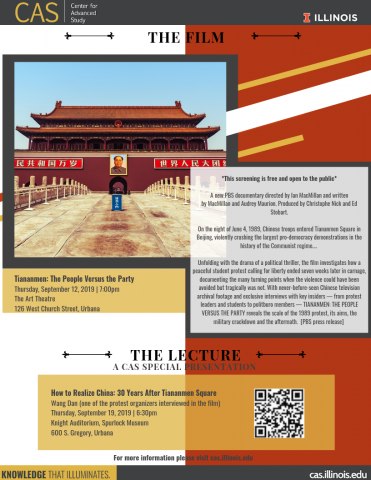