11am, Christina Bashford, Music and the People: Violins in British Working-Class Life, 1870-1930
Deriving from her book project, Forgotten Voices, Hidden Pleasures: Violin Culture in Britain, 1870-1930, Professor Bashford’s talk focuses on the thousands of adults and children from the British working classes who gained unprecedented access to learning the instruments of the violin family at the end of the 19th century. This presentation will address the social, economic, and educational structures that made their participation possible; the significance the violin had in people’s daily lives; and the enduring impact this musical movement had on both music education and classical music in Britain through much of the 20th century.

Noon, Mauro Nobili, The Tārikh al-Fattash and the Making of an Islamic State in West Africa
This paper explores the intertwined histories of a West African Arabic chronicle, the Tārīkh al-fattāsh and its role in establishing the legitimation of the 19th-century Caliphate of Ḥamdallāhi, located in today’s Republic of Mali. Previously understood to be a 16th- or 17th-century work, Professor Nobili will prove that the Tārīkh al-fattāsh was in fact written in the 19th century in order to enhance the legitimacy of Ahmad Lobbot, who rose to become the founding ruler of the Caliphate without belonging to any elite of the time. In doing so, this paper will raise crucial issues concerning religion and politics in pre-colonial West Africa, as well as the use of literacy as a tool of state power. 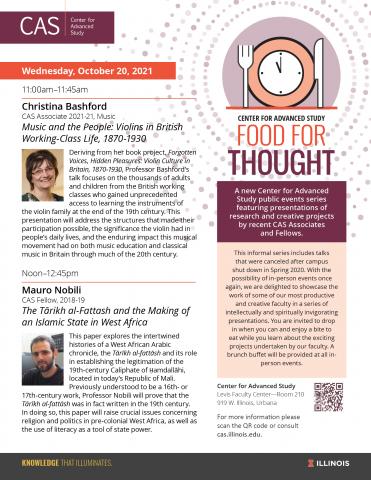