11:00am, Lilya Kaganovsky, The Address of the Eye: Esfir Shub’s Today, Lilya Brik’s Glass Eye, and the ‘Lost' Films of the Soviet Avant-garde

The year 1929 might be thought of as a turning point in the history of Russian film. Already aware of the coming of sound and the changes brought on by Stalin’s cultural revolution, films by major male directors released in 1929 represented a final push of Soviet montage cinema to assert its visual and ideological superiority over bourgeois forms of entertainment. Yet, at the same time that Vertov, Eisenstein, Dovzhenko, and others were completing what would become their last avant-garde projects, several female directors were also making films – but these have been lost to history and forgotten by time. This talk will look closely at Lilya Brik’s 1929 Glass Eye and Esfir Shub’s 1930 Today in the context of Soviet avant-garde cinema, but also, in terms of women’s cinema’s engagement with the haptic: a world viewed, gathered, perceived, and expressed through the senses (sight, hearing, touch), or, as Laura Marks has put it, the way film “signifies through its materiality, through a contact between perceiver and object represented.”

This talk wrestles with the question: what if freedom, agency, and domination weren’t the overarching terms used for thinking about slavery and its afterlife? 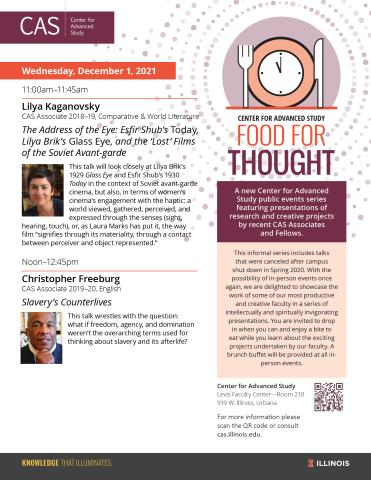