Again and again, leading politicians were murdered in the fledgling Dutch Republic. The first military commander in the war for independence against Spain, William I, was assassinated in 1584. Johan van Oldenbarnevelt, statesman and founder of the Dutch East India Company, was executed on trumped up charges in 1618. Johan de Witt, who opposed William I’s descendants gaining power, was lynched by an Orangist mob in 1672. In all three instances, visual print media shaped public opinion before or after events, helping to lay the groundwork for their fall from power or affirming those who gained power as a result. This lecture will take a closer look at several broadsides on view this Fall at Krannert Art Museum in the exhibition Fake News and Lying Pictures: Political Prints in the Dutch Republic, a version of which will travel to University of San Diego Galleries and Smith College Museum of Art in Spring 2023 and Fall 2023. 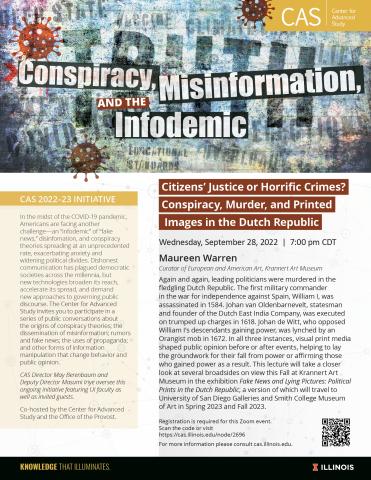