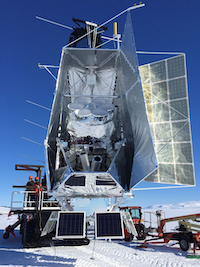 Observing the Dawn of Time from Above the Clouds: new telescopes for the second flight of SPIDER

Professor Filippini’s research group explores the deep connections between the universe’s workings on its largest and smallest scales. To that end, they build instruments to observe the cosmic microwave background (CMB), the relic glow of the hot early universe as it existed more than 13 billion years ago. Measurements of the CMB draw upon numerous fields of science and engineering, from condensed matter physics and electronics to aerospace engineering and data science, and have yielded critical insights into the composition and history of our universe.

The research group hopes to build and deploy new telescopes for the second observing flight of SPIDER, a balloon-borne instrument designed to characterize the polarization of the CMB. These observations will be used to seek evidence of primordial gravitational waves from the universe’s earliest moments, which would yield transformative information about how our cosmos began. These new telescopes will enable SPIDER to better discriminate this primordial signal from contaminating glow from our own galaxy, enabling the most powerful probe to date of cosmic origins.

During his CAS appointment, Professor Filippini and his team will further refine and characterize the SPIDER instrument, begin some flight hardware tests in the lab, and analyze the data from SPIDER’s first flight.