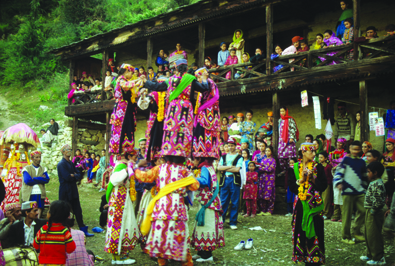 Professor Chhatre is drawing on ethnographic and historical data from the Himalayan province of Himachal Pradesh, India, to develop a dynamic model of democracy and its role in facilitating adaptation to climate change.

Himachal Pradesh offers case studies that are particularly well-suited to this kind of research. India has a longstanding tradition of national and state-level democracy with uneven application across local jurisdictions. In 1971, Himachal Pradesh scored very low on indicators of human development and democratic performance. Today, it is one of the few provinces in India with high scores in both areas. Lessons from this province thus hold great significance for understanding the emergence of democratic governance.

The province has also grappled successfully with land-use and environmental challenges. Mobilization of tenants and landless peasants in 1968-77, for example, led to a partly successful redistribution of land in favor of the poor. A 1982-89 social movement against environmentally destructive forestry practices resulted in widespread reform. And when climate changes and cheaper imports in the 1990s threatened the production of apples—a principal source of local income—the province introduced policies and programs that allowed households to shift to alternative livelihoods.

In analyzing such case studies, Professor Chhatre pays close attention to two aspects: (a) the dynamics of electoral competition between political parties and the role of elections in articulating citizens’ interests and (b) the embeddedness of local events in larger processes at various macro levels. He plans to complete a book manuscript, linking the lessons learned to global debates on adapting to climate change.