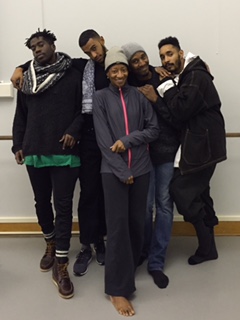 During her Center appointment, Professor Oliver will develop sections of the evening-length, dance-theatre work Virago-Man Dem premiering in 2017. Virago-Man Dem examines complexities of black masculinity. The title of the work is relevant to the project in three distinct ways. In the Caribbean, an area central to all of Professor Oliver’s creative research, Virago is a term alluding to that “je ne sais quoi” power that works behind the veil of the world we know. The Latin root of Virago, vir, refers to the virile, and the term’s “official” dictionary meaning, refers to cultural and gender transgression, often used in derogatory relation to a woman who possesses tendencies, like bravery or aggression, that are most associated with men. Professor Oliver is interested in these components and especially the transgressive ambiguity of the term, which takes on a very particular life in the Caribbean. Despite the region’s rampant homophobia, masculinities in the Caribbean are wildly flexible in the ways they are expressed through personal style, posture, and men’s interactions with others. Virago-Man Dem will attempt to capture this, along with a broader spectrum of black masculinities through movement, visual mediums, sound environments/music, and the spoken word.

To arrive at this material, Professor Oliver plans to create environments locally to facilitate conversations among black men about their masculinity. She will invite them into the rehearsal process, and ultimately create a work that speaks with and to communities of black men. Virago-Man Dem will thus allow Professor Oliver to explore the spoken and unspoken attitudes and expressions in multiple black masculinities as they are performed by communities of men, staged on male bodies, but designed and interpreted by a woman—Professor Oliver herself. The work will be a performance of masculinity emerging from subtle, intra-gendered movement communications uniquely expressed through choreography.