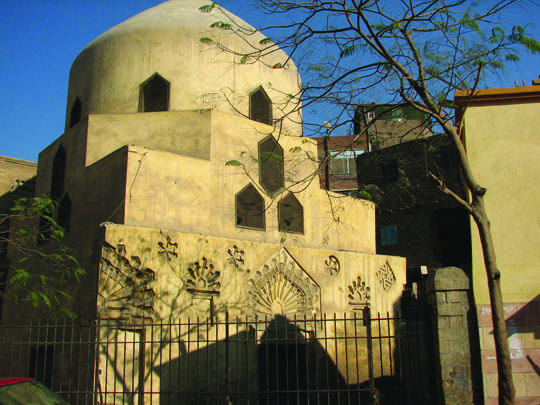 Queen Shajar al-Durr (r. 1250) was a rare case of a woman ruler in Egypt, and her distinctive architectural patronage changed the face of Cairo and had a lasting impact on Islamic architecture. Rising from slave origins, Shajar al-Durr (whose name means “Tree of Pearls”) became concubine, wife, and regent to the Sultan Salih (r. 1240-1249), and ultimately was appointed as the legitimate ruler of Egypt after the sultan’s untimely death. Her reign was short and so controversial that the caliph wrote from Baghdad to condemn the appointment: “If you have no man who can rule, then we will send you one.” In architectural history, her patronage was innovative because of the tombs that she added to Salih’s madrasa (theological college) and her own, thereby transforming those institutions into commemorative monuments. For the first time, an architectural complex was empowered to stand for the founder himself, visibly and unforgettably manifest in the tomb’s high dome, rising above the urban skyline. This dramatic transformation—in which architecture embodied human identity—was made possible by Shajar al-Durr, a woman who began her career as a mere slave. Her path-breaking patronage contradicts the prevailing assumption among historians of Islam that there was no distinctive female voice in art and architecture.