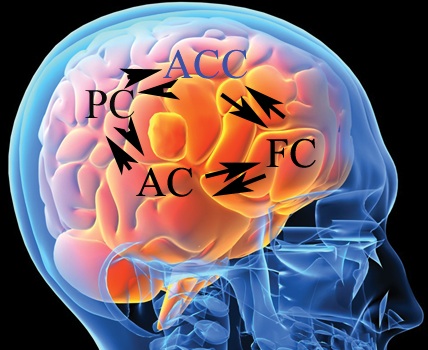 Connectivity of Brain Regions Affected by Hearing Loss and Tinnitus

About 50 million Americans experience some form of tinnitus, with a “ringing in the ears” of such sounds as hissing, buzzing, chirping, ringing, and high-pitched tones. Some 20 million suffer to such a degree that they seek medical treatment and 2 million are sufficiently debilitated that the syndrome affects their day-to-day functioning. Incidences of both tinnitus and hearing loss increase with age, and approximately 90 percent of those with tinnitus also have some form of hearing loss. The reverse is not true, however, and only about 40 percent of those with hearing loss develop tinnitus. During her Center appointment, Professor Husain will study anatomical and functional connectivities revealed through brain scans to differentiate these conditions and determine their relation to each other.
The current project continues Professor Husain’s analysis of ongoing brain-imaging studies funded by the Tinnitus Research Consortium. Her previous work has implicated a role of the attentional network in tinnitus perception, and this will be tested explicitly. She will also investigate the functional network that mediates attention in auditory processing. Three types of imaging techniques are involved: spatial MRI (sMRI), to locate gray-matter nodes or regions of the network; functional MRI (fMRI), to determine functional participation of the network’s nodes while participants perform tasks of varying complexity; and diffusion tensor imaging (DTI), to identify changes in the white-matter connections of these nodes.

Professor Husain plans to develop structural equation models (SEMs) in order to consider anatomical and functional connectivity simultaneously within the same framework. The six projected models will differentiate tinnitus and hearing loss as well as low- and high-attention tasks. In the future, she hopes to generalize the SEMs approach to subgroups within the tinnitus population and associate each with a set of behavioral measures. This should help to explain how a given treatment works better with some tinnitus patients than with others and also lead to the development of targeted treatment methods.