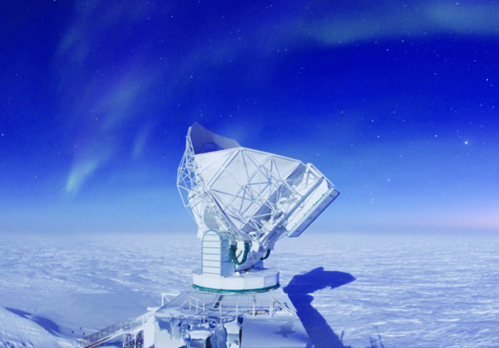 Observing the Birth of the Universe: Building and deploying a new camera for the South Pole Telescope

Professor Vieira builds telescopes and cameras to study the origin and evolution of the universe. As an observational cosmologist, he spends most of his time studying the cosmic microwave background (CMB)—the relic thermal radiation from the Big Bang—to observe the universe as it was over 13 billion years ago. The technology involved in CMB research has strong overlap with material science, electrical engineering, and condensed matter physics.

Professor Vieira’s group is an integral part of the South Pole Telescope (SPT) project. The SPT is a 10-meter telescope located at the geographic South Pole and optimized for precision imaging of the CMB. Over the last decade, SPT has placed unique constraints on the nature of dark energy, precisely measured the amplitude of matter fluctuations in the universe, discovered a new population of distant galaxies, and measured the cosmic gravitational lensing of the CMB. The team is currently building a new state-of-the-art camera for SPT to detect and characterize the polarization of the CMB. This measurement will constrain the epoch of cosmic inflation and the mass of the neutrino particle. The scientific goal is to answer the most basic and profound question ever posed by humanity: How did the Universe begin?

During his Center appointment, Professor Vieira will spend time developing new instrumentation, building cryogenic optics and electronics for SPT, and deploying the camera to the South Pole in Winter 2015/16.