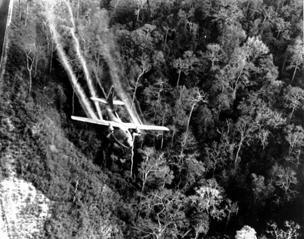 Agent Orange: The Cultural History of a Reproductive Hazard in the United States and Vietnam

During the Vietnam War, the U.S. military sprayed herbicides over Vietnam as well as Cambodia and Laos. Agent Orange, the most infamous of these, was designed to kill the jungle, thus exposing the hidden enemy, and was sprayed on crops to “deny” them food. From the earliest spraying to the present, people complained of its lasting effects on the environment and its effects on their own bodies.

Agent Orange consists of two herbicides: 2,4-D and 2,4,5-T. It is the second compound that contains dioxin and is associated with human respiratory problems, cancers, miscarriages, and congenital malformations. In the 1970s, 2,4,5-T was used in U.S. national forests and on residential lawns to clear unwanted trees and weeds. Wherever Agent Orange and 2,4,5-T were used, they sparked protests.

Professor Reagan’s book project, Sprayed: A Cultural History of Agent Orange in the United States and Vietnam investigates the herbicide’s transnational sociopolitical and cultural history. Her inquiry is both historical and contemporary. Although Agent Orange was banned, it has a long life that continues into the present in the environment, in the changed landscape, and in human bodies that cough, erupt with sores, suffer cancers, and are born misshapen. It continues, too, in memory and culture.

In Sprayed, Professor Reagan finds that the story is more than the victimization of American veterans; it is a shared history with the people of Vietnam. Part I provides a chronological history of U.S. use of Agent Orange both in the Vietnam War and at home. Part II moves to Vietnam, describing how Agent Orange arose as a political issue there in the 1980s, and analyzing visual and cultural representations of Agent Orange in museums and film.