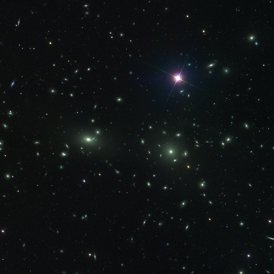 The standard cosmological model posits that 95 percent of the matter-energy budget in the universe consists of two unknowns: dark matter and dark energy. To gain a better understanding of the nature of these two dark components, scientists usually construct a three-dimensional map of visible matter: first obtaining two-dimensional images of the sky, and then obtaining spectra of the objects identified and determining source classifications and redshift line-of-sight distances.

Inherent limitations to this approach argue for a new way to obtain cosmological measurements directly from imaging data, and this is the current focus of Professor Brunner’s research. During his Center appointment he plans to explore how probabilistic techniques can be used to classify sources and estimate distances, and subsequently be applied to make precise cosmological measurements.

Professor Brunner proposes to develop three distinct machine-learning techniques for generating probabilistic classifications. He will then develop a meta-classifier that combines the three techniques and accelerate their implementations to scale efficiently to the petascale regime. Finally, he will apply the resulting data-software instrument to determine new, more precise cosmological constraints using data from the Dark Energy Survey (DES).

The project is timely for several reasons. In Fall 2014 the first season of data from the DES will be fully processed and calibrated, and the second year of data will begin to be acquired. As other scientists look to use DES data, they will be needing accurate, probabilistic source classifications and distance estimates. Thus, Professor Brunner plans to distribute his work via the official DES project archive, where it can be used by scientists worldwide.