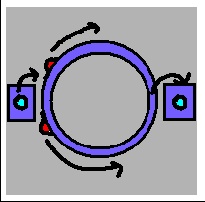 One of the most spectacular predictions regarding collective behavior in quantum systems in one and two dimensions is the existence of fractional quasiparticles whose quantum mechanical properties can be vastly different from those of the individuals comprising the system. Professor Vishveshwara’s research broadly aims to detect and manipulate such quasiparticles. During her Center appointment, she will address related issues and execute two ideas to study correlations between quasiparticles and their dynamics in novel geometries:

Results from these theoretical investigations and proposals for experiment will throw light on fundamental features of fractional quasiparticles and also potentially open the way to connections with quantum computational schemes. Professor Vishveshwara plans to present the results at international conferences and work hand-in-hand with experimentalists to implement the results.