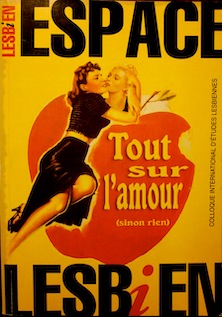 Since the 1970s, politically active lesbians in France have sought to impose lesbian existence on the public sphere. Their motto – “without visibility, no legitimacy!” – challenges a republican doctrine that posits public space as concerned uniquely with equality before the law and relegates freedom of expression to the private realm. Professor Chaplin’s book-in-progress, Sappho Comes Out: Lesbian Lives in Postwar France, 1960-2000 (which she will complete during her Center appointment) explains how the mass media became a critical tool in this fight. The media in France are intensely political and extremely influential. Until the mid-1980s television and radio were owned by the state, and the press retains a stridently partisan tradition. By analyzing lesbian claims on the French public sphere (e.g., the first lesbian website, lesbian radio programs, lesbian presence on French television, lesbian journals and press), Professor Chaplin demonstrates how lesbians used the media to claim legitimacy in a country where the protection of the abstract liberal individual militates against official acknowledgment of sexual, religious, or racial identity. She forces a rethinking of the role of the media in scholarship on sexual minorities, social movements, and citizenship.

In her work, Professor Chaplin questions the ways in which the history of homosexuality is often told relative to a set of laws and issues (regarding sodomy, prostitution, cruising, pedophilia, and AIDS) that have less relevance for lesbians. And she argues for new histories of both homosexuality and feminism that encompass media activism and a lesbian presence. Finally, by focusing on provincial towns and villages as well as major cities, Chaplin’s project destroys the myth of urban centrality that often governs the history of social movements.