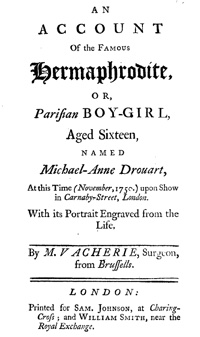 Invoking Greek mythology, the term “hermaphrodite” was used for all bodies that did not fit within the gender binary. Professor Hilger’s book Liminal Bodies investigates the fascination with these hermaphrodites in the context of broader epistemological debates by focusing on the genre of the case study. This genre gained in popularity during the Enlightenment as it used conventions of both scientific writing and literature, satisfying the demand for empiricism while using the same narrative framework that popularized the novel in the eighteenth century, namely the focus on one single individual in a specific contemporary context, often extreme or unusual.

Liminal Bodies examines mid- to late-eighteenth-century case studies on hermaphrodites from three different languages and national contexts—British, French, and German—and focuses on those written about Anne Grandjean, Michel Anne Drouart, Maria Dorothea Derrier, and an unnamed “Angolan hermaphrodite.” Multiple case studies were published about each of those individuals and will be discussed throughout five chapters, each of which focuses on one momentous epistemological shift in the eighteenth century: an increasing focus on empirical science, professional specialization in the medical field, the expanding market for popular scientific literature, changing notions about generation and reproduction, and the exploration of foreign territories.