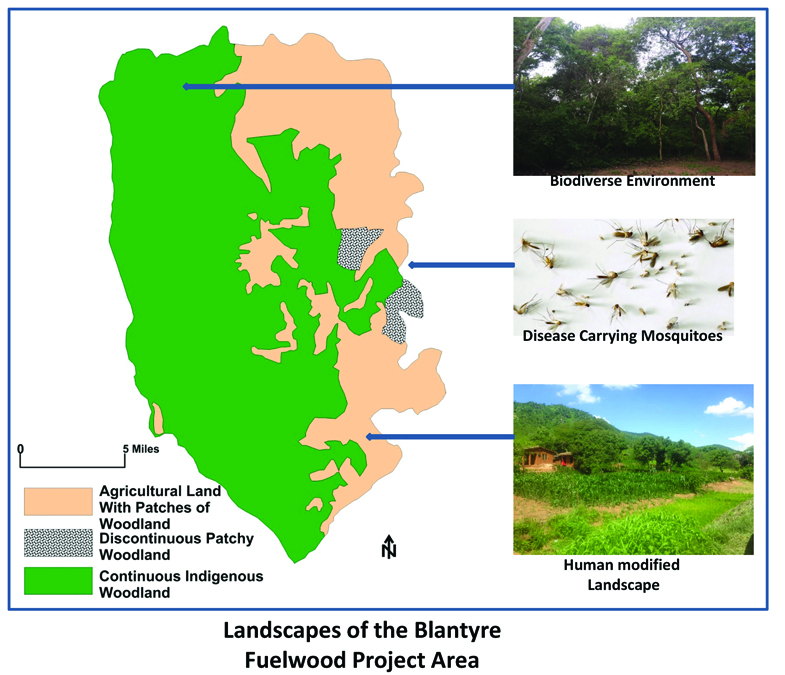 The Impact of Deforestation on Vector-borne Diseases in Southern Malawi: The Case of the Blantyre Fuelwood Project Area

This proposed study will examine the link between biodiversity and disease dilution or amplification in the Blantyre City Fuelwood Project (BCFP) area of southern Malawi. It will shed light on the following two questions: 1) How do changes in biodiversity affect human health and/or the risk of a vector borne disease such as malaria transmission? 2) Can an interdisciplinary approach to studying the relationships among structural diversity, habitat availability, vector ecology, epidemiology, and human behavior be used to reduce the risk of malaria transmission in the BCFP area? As such the central goal of the study is to test the disease dilution hypothesis using malaria in southern Malawi as a case study.

The following specific objectives will be accomplished during the course of the study: (a) document the spatial pattern and extent of forest cover change in the BCFP area of southern Malawi between 1948 and 2010; (b) examine the presence and intensity of malaria carrying mosquitoes sampled on a forest and deforested transect with a gradient from heavily deforested, densely populated to heavily forested area with great biodiversity; and (c) conduct genotyping on the collected samples of mosquitoes to gauge the presence and genetic variation of malaria protozoa across the forest/deforestation transect.

Professor Kalipeni will travel to Malawi in order to work with colleagues at the College of Medicine in Blantyre. While in Malawi, he will also have the opportunity to analyze remotely sensed images that go back to the late 1940s obtained from the Department of Lands and Surveys of the Government of Malawi as well as to collect a sample of mosquitoes for genomic testing at the College of Medicine in Malawi and at the University of Illinois.