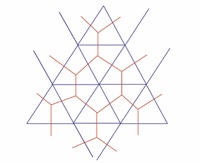 A doughnut-shaped surface, perhaps with more than one hole–or none at all, can be cut into triangles, and if we record how the cuts were done, we can put the surface back together by gluing. Alternatively, we can create a dual surface, where we make new triangles with a vertex for each of the original ones, and sides corresponding to the touching data of the original triangles. Poincaré’s amazing theorem from 1895 tells us that the dual shape will have the same number of holes as the original, regardless of the way cuts were done. Since its discovery, this duality result has been improved on and generalized in many different areas of mathematics. One notable example comes from number theory, and the starting point of this proposed project is establishing a relationship between duality and the basic but extremely difficult question of when does a polynomial equation have solutions in the rational numbers. Formally adding solutions to rational polynomials, and studying their interrelationships, ultimately leads to the creation of a shape whose abstract characteristics resemble that of a doughnut-shaped surface. The algebraic avatar of a duality phenomenon in this setting was studied by Poitou and Tate in the 1960s, and goes under the name arithmetic duality.

Basic principles in homotopy theory lead to the observation that if one coherently adds information about continuous deformations of those polynomial solutions, a stronger, homotopical version of duality should hold. Professor Stojanoska’s preliminary work indicates that this homotopical duality will not only recover all known obstructions to solving polynomial equations, but will also deliver a new and unexplored obstruction. In addition to developing the theory, she plans to design a procedure for effectively calculating the resulting obstructions.