An Evening with Nicole Krauss

Of Forest Dark, Philip Roth says, “A brilliant novel. I am full of admiration.” Forest Dark traces the juxtaposed stories of Jules Epstein and a character named Nicole. As Epstein’s life unspools and re-spools in curious ways, he travels to Tel Aviv where he could not have anticipated what would happen; similarly, but also in a starkly different vein, a young writer abandons Brooklyn for Tel Aviv and becomes immersed in a fascinating search for a Kafka who might have “finally crossed the threshold, slipped through a crack in the closing door, and disappeared into the future.” 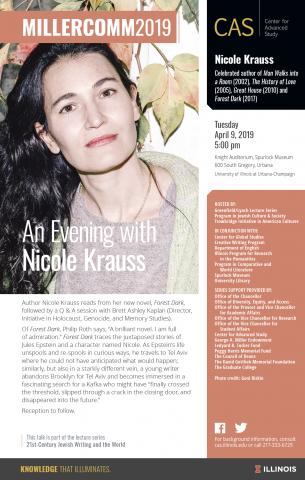