11:00am, Eric Calderwood, Remembering the Women of al-Andalus: Imagining Feminist Pasts and Futures

Large parts of today’s Spain and Portugal were ruled by Muslims between 711 and 1492, and during that period, the territory was known as al-Andalus. Al-Andalus ceased to exist as a place in 1492, but its memories and legacies have survived in many cultural forms and have animated a diverse range of cultural and political projects throughout today’s world. Professor Calderwood's current book project, The Future of al-Andalus, traces the long and often contradictory afterlife of al-Andalus, placing particular emphasis on moments when the memory of al-Andalus has intersected with the history of European colonialism in North Africa and the Middle East.

Among the diverse uses and meanings that al-Andalus has acquired in contemporary culture, one of the most salient is the idea that al-Andalus was a place of exceptional freedom or creativity for Muslim and Arab women. Professor Calderwood will explore the history of this idea in his talk, showing how the memory of al-Andalus has become intertwined with modern debates about feminism and gender in the Middle East, North Africa, and beyond.

In this talk, Professor Pinkert reexamines the revolutionary unrest that brought down the Berlin Wall. Focusing on post-1989 art documentary film, she shows how the vision of an alternative society that mobilized many East Germans is to this day controlled by hegemonic memory regimes. 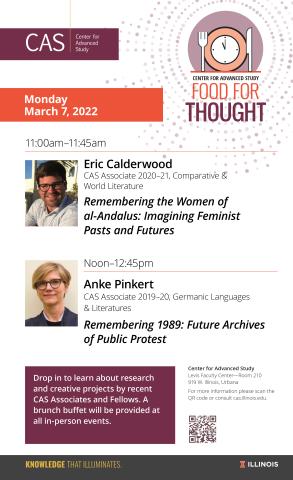