Neuromusic—Propositions from an Art-Science Convergence

What is form? What is an instrument? Is time granular and emergent? How do hyper-brain ensembles perform? Questions like these are being explored in experimental music. In this talk, David Rosenboom will present concrete examples from his more than five decades of pioneering work in propositional music illustrating how testable theoretical models in science and process-based what-if models in speculative arts can converge to mutual advantage in the new artscience: musical forms that arise spontaneously and evolve, listening as performance, networked telematic projects, large-scale collaborative forms, new approaches to notation, adaptive engineering in interactive instruments, cybernetic compositions employing direct musical interface with the human brain, and more.

David Rosenboom is a post-genre composer-performer-interdisciplinary artist, whose work highlights solo to large-scale emergent musical forms, multi-cultural collaborations, interactive technologies, artscience, neuromusic, and more. He studied in the stimulating environment of late 1960s UIUC, which led to an unbounded journey exploring new ideas through music. He has held important positions in multiple institutions, including York University, Mills College Center for Contemporary Music, and others; he now holds the Roy E. Disney Family Chair in Musical Composition in the Herb Alpert School of Music at California Institute of the Arts, where he was also Dean from 1990 through 2020; his work is widely presented, recorded, and published internationally, including major retrospectives at Whitney Museum of American Art, Centre Pompidou-Metz, and Tokyo Opera City. Rosenboom was named a Yamaha Artist in 2012.

Hosted by: School of Music

Narrative summary of the residency HERE

Oct 3, Neuromusic—propositions from an art-science convergence 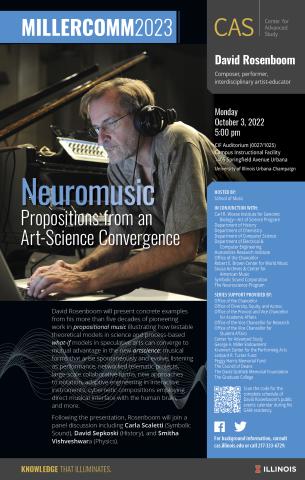