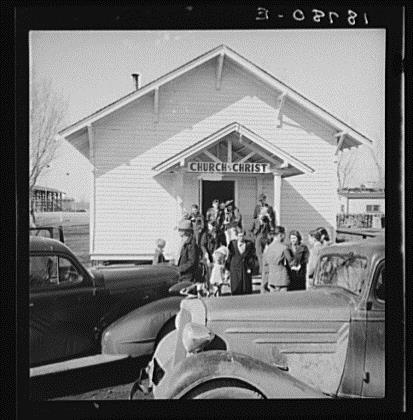 A Wandering Oklahoman Was My Father: Religion, Migration and the Great Depression

In the United States, religion and the economy have interacted in fascinating, compelling, and sometimes upsetting ways since at least the middle of the nineteenth century. Some religious voices have sanctified wealth and treated economic success as evidence of divine blessing; others have reminded the faithful of the stinging critiques of greed that permeate the scriptures of Judaism, Christianity, and most other world religions. During his Center appointment, Professor Ebel will undertake a book-length study describing ruptures and continuities in religious engagement with poverty and wealth during a particularly fraught moment in U.S. history: the Great Depression.

Professor Ebel will focus on lay religious responses to experiences of poverty and dislocation, primarily among those who migrated from the Dust Bowl west to California. His interest is how religious practices were maintained (if they were maintained) through migration and resettlement, and how religious ideas and narratives helped to shape and give meaning to the experiences of dispossession in the 1930s.

During his Center appointment, Professor Ebel will visit archives and historical societies located in the Great Plains, the West, and the Southwest, seeking personal letters, diaries, and memoirs that describe the religious lives and thoughts of those who were displaced. He aims to characterize the religious culture of the migrant camps in California, the ways local churches and religious authorities interacted with the resettled populations, and, if the archival sources allow, the assimilation of the migrants’ religious dimensions into local and national memory.

Central to this study is Professor Ebel’s working thesis: in shattering the economic covenant of America’s gospel of prosperity, the Great Depression prompted many Americans to seek guidance and meaning in the terms and history of the biblical covenant between God and the Israelites.