Global, Local, and Personal: Understanding the History of Immigration to the United States in the Twentieth Century

Few experiences convey the transnational quality of historical change more dramatically than migration, yet we seldom consider what such massive population movements meant on a human scale - to the immigrants themselves. The experience shaped people who were themselves transnational in the most profound sense. Immigration to the US might best be understood by what might be termed an "inter-ethnic" approach that stresses contacts between diverse ethnic and racial groups and the creation of transnational cultures in the very heart of American industrial cities. Focusing primarily on the last great period of mass immigration from the end of the nineteenth century through the 1920s, Barrett suggests the many levels at which immigration was experienced - from the global to the personal, and analyzes scholars' changing understanding of these immigrants and their worlds. Probing the subjective dimension of immigration history returns us to one of our oldest questions, one that remains relevant in the midst of a massive new immigration today: What did it mean to be an "American" and how did people from diverse backgrounds make this transition? 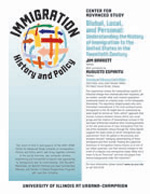