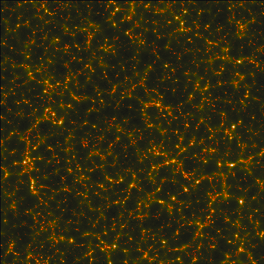 New signatures of neutrinos in cosmology

During his Center appointment, Professor Dalal will continue his group’s work on a promising new method to resolve this obstacle. The method involves combining techniques from traditional N-body simulations (Lagrangian methods) with techniques from hydrodynamical simulations (Eulerian methods) – in essence describing neutrinos not as discrete particles but as a fluid governed by fluid equations. The method has yielded the first code in the world capable of consistently computing cosmological structure formation, including the effects of neutrinos.

The current project will apply the code to run simulations that map out the effects of massive neutrinos as a function of the mass hierarchy. A crucial aspect is that the simulated volume must be large enough to encompass the free-streaming scale, the typical distance traveled by neutrinos since the Big Bang, while having sufficiently fine spatial resolution to detect individual galaxy halos.

Preliminary results of smaller-scale simulations suggest that the spatial distribution of galaxies provides a new signal of neutrino masses. If correct, this result would imply that galaxy surveys will be able to measure the masses of neutrinos, thereby opening a new window onto neutrino physics and filling in one of the final remaining pieces of the Standard Model of particle physics.